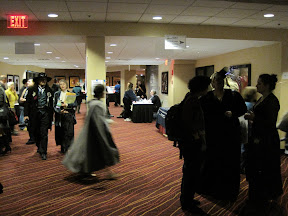 "When I moved here from the west coast," said Marlin May, a black, homosexual SF fan who I met first on Twitter, and who compared "coming out" as an SF fan to "coming out" as gay, "I didn't know a lot of people. But when I started going to con[vention]s here, I felt like I was home. I was back where I belong."

It was a sentiment I heard over and over again from people at Arisia, New England's Largest Science Fiction Convention (attendance: about 3,000). On one panel, the moderator opined that cons are “where we seem to fit. In other places is where we're playing roles,” with the deliberate irony that the convention was full of role playing games. One woman I talked to referred to Arisia specifically as a “lifestyle con”. This was a convention run by fans for fans to come and hang out and play and fuck. Which helped explain the lack of corporate presence that one finds at your average comic book convention. There were no booths for major publishers here, no b-grade sci-fi actors being paid for autographs, no developers giving advanced previews of their latest video game offering. A panel on the future of Doctor Who, which at New York or San Diego Comic-Con would have been made up of writers, producers, and/or stars of the TV show, was instead made up entirely of fans. The moderator began “Well, we've only got fifteen seconds of footage to go on, so I'm not sure what we're going to talk about,” and then the panelists started talking about their favorite episodes of the show instead. Most of the panels were simply manned by other fans, who didn't seem any more qualified to talk about a given subject then those in the audience, which was probably why the audience felt so entitled to give their own opinions at length whenever the mood arose, as if everyone was part of the panel.

Among the entertainment offerings, along with movie and tv show screenings, there was a comedic stage show lovingly parodying the old time radio programs of the 30's and 40's, in which half of the jokes were not jokes at all but merely references to geeky media, lines drawn from this or that tv show, movie, book or video game, thrown out to thunderous laughter and applause. There were many panels about and performances of something called 'filk' music, which is basically folk music about geeky subjects designed so anyone can come and sing along. There was also a "pagan mythpunk singer-songwriter" with a wonderful voice who, in one of three performances at the con, dressed up as a pirate and sang a whole set of pirate songs, depicting romanticized tales of girl pirates sailing the high seas and getting laid by selkies. 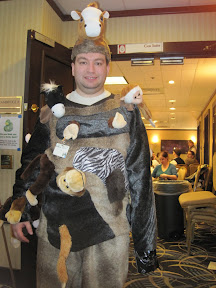 And there were the costumes, so many costumes, thousands of hours of work represented in stunning recreations of carefully embroidered Victorian hoop dresses, leather-and-steel-clad post-apocalyptic warriors, elves in cloaks and pointy ears, uniforms from every space opera TV show or movie, anime characters in long, tight-fitting coats. And, the Steampunk fad in full swing, there were more goggles and corsets than I could count. One man was dressed as a "pony-monkey", his full body suit covered in sewn-on parts of stuffed animal monkeys or ponies which he said took him 100 hours to put together. It was a reference to a song by geek-beloved musician Jonathan Coultan, and people would quote lyrics at him as they walked by. Saturday night culminated in a “masquerade competition” in which each participant came out and performed a little skit based around their costume. An hour in I ducked out to see the movie Moon being screened in another room and when I came back after, the masquerade was still going on. 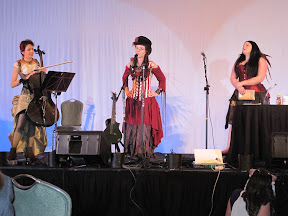 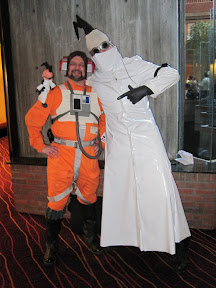 I spent most of the con trying to understand exactly why, rather than feeling like I belonged, I felt extremely uncomfortable, even repulsed. I had long conversations with people in which they told me flat out, “You're one of us. You know all about Doctor Who and program computers and argue about fantasy novels, and you can be in denial about it, but you're one of us.” They even went so far as to say that people who were really obsessive about anything, say, baseball stats or engineering or philosophy were really fans (or, dear lord, fen) at heart. A panel on "psychology and fandom" spent a lot of its time talking about the psychology of intelligent people, of passionate people, as if these traits and fandom were mutually inclusive, even as they also acknowledged that not all smart people were fans, and danced around the idea (without ever explicitly stating it) that the intense desire to escape into a fantasy world was borne of unhappiness and loneliness.

I'll be the first to tell you that there's nothing wrong with escaping into a fantasy world every once and a while. But I can't help but balk at fantasy as a lifestyle, at people who recreate themselves and their lives so that they can spend as much time as possible inside a fictional world. Lots of people at this con also go to RenFair and Burning Man and participate in the Society for Creative Anachronism. Lots of them were or are into the "goth" scene. (Two people described SteamPunk as goths who had discovered brown.) Their minds have defected, at least on some level, from the world of contemporary adults to a different world in which their identities can be fictionalized, romanticized, idealized, in which the rules and restrictions of modern society are gleefully thrown off. And when they gather together there's a certain prickly cliquishness that crops up. One audience member at a panel opined at length how fans need to give up their sense of entitlement and superiority so that they can reach out to the general public, the people fans often deride as "mundanes". Fans are justifiably defensive of their lifestyle because they know that much of the public at large recoils from their behavior. 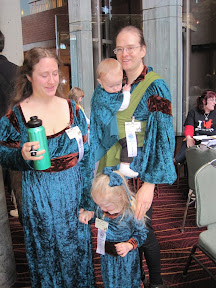 So why do I feel so uncomfortable here? Because I feel like they've taken cultural touchstones, things that I love, and turned them into holy relics, defined entire lives by their fictional worlds. They've done this with great flair and creativity and often humor and truckloads of passion. But it's the very essence of materialism. If you are not your wallet and you are not your car then you are also not your hand-sewn hoop dress, your goggles, your furry ears, your fangs, or your proton cannon. You are not a Na'vi or a Starfleet officer or an Air Bender or a cartoon cat no matter how much you want to be. Which realization, in turn, forces me to take a hard look at myself. I often call myself a “book person”, I'm a book blogger, I read constantly, though I tend to buy books faster than I read them, and I fiend for used bookstores where I can turn up cheap treasures. These are traits anyone at Arisia would instantly recognize as those of a geek, a fan. In fact, this kind of obsessive passion about something and self-identification with it would be the very definition of a geek or a fan for many of the people I talked with. Which makes me wonder if this too isn't a form of materialism, whether it's healthy to define myself by any objects, even my beloved books. I am not my books. I am not even my desire for books. At what point does the passion stop being a service to you, and you start being a service to the passion?